Girvan Academy Theatre was the setting for a very special night in the Clubs history as well as it being the Annual Open Evening it also marked the exact date, 28th November 1973 of the Clubs formation.

Helen Walker Chairperson welcomed everyone and gave a brief history of how 45 years ago tonight the Club was formed, stemming from an idea between two friends, Mrs Mosley and Mrs Cullen, their aim was promote friendship through flowers and this they certainly achieved. The first Demonstration was held in The Unitas Hall, with Jenny Logan being the first Demonstrator. At the first committee meeting it was agreed to offer a service on a Rota System of Flower Arranging to the Davidson Hospital, this system still continues having transferred to The New Community Hospital.

Helen then stated how pleasing it was to welcome the large audience to the Open Night and Sapphire Anniversary celebration. Helen proceeded to invite Betty Richmond and Betty Shields, two stalwart members of the Club to cut the anniversary cake with her. Helen and Vice Chairperson Fiona Robertson presented Corsages to the two ladies with Helen already having given corsages to committee members.

The formal part of the evening over, Helen apologised for the slight delay in proceedings explaining the horrendous journey undertaken by tonight’s Demonstrator but pleased to announce the safe arrival and to welcome on stage Chelsea award winning NAFAS Area Demonstrator Vanessa Wellock from Ilkley "On Tour" with her "5 Gold Rings" demonstration.

Vanessa proceeded with her demonstration firstly promoting recycling of flower boxes and producing the most colourful arrangements of Carnations, Lisianthus settling on sledges, moving onto Trugs filled with Amaranthus, Grand Prix Roses to name but a few, the mannequin with her floral sporran of Anthuriums and Vanda Orchid necklace certainly had the audience spellbound, Vanessa then gave some tips and produced a ring covered by tissue paper dipped in candle wax with filling of twigs, lace flowers and asparagus fern. Her penultimate arrangement consisted of test tubes and bobbles adorned with Gloriosa, Anthuriums and Cala Lilies, her "5 Gold Rings" Finale of Carnation Caroline, Confidential Roses and Phalaenopsis Orchids and Cala Passion Fruit Lilies made for a stunning, colourful stage which drew gasps of admiration from the audience.

Fiona Robertson was then called upon to give the vote of thanks to Vanessa a most talented, artistic lady for her "Wow" factor demonstration. Thanks were also given to Callum the lighting operator and the Janitor.

Helen then asked Vanessa to draw the raffle resulting in the lucky winners happily taking home the wonderful exquisite arrangements.

The audience were then invited to move through to the Cafeteria to enjoy refreshments and anniversary cake. A most fitting finish to the first part of the club season, the next Demonstration takes place in Girvan Community Centre on 23rd January 2019 featuring Karine Murray from East Kilbride. 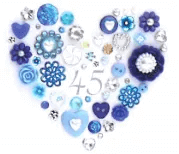 The 40th Anniversary Demonstration & Dinner of the club was held in Malin Court on Wednesday 26th March, Chairman Margaret Findlay welcomed a large number of club members and friends as well as members from Ayr and Stranraer clubs, she then introduced the top table which included Founder Members Mrs. Pat Mosley (the clubs first Chairman) and Mrs. Frances Bertolini, in welcoming our founding members, Margaret expressed the thoughts and thanks to the many members now passed on, who helped make the club what it is today.

Margaret then gave a brief background of the club, which stemmed from an idea between Mrs. Mosley and her friend Mrs. Margaret Cullen, their aim was to promote friendship through flowers, and over the past 40 years this has certainly been the case.

The inaugural meeting was held in The Unitas Hall on 28th November 1973 with Mrs. Mosley presiding and 42 ladies attending, Mrs. Jenny Logan from Dailly was the first Demonstrator.

At the first committee meeting it was agreed to offer a service on a rota system of Flower Arranging to the Davidson Hospital, a system that still continues in The New Community Hospital. The Unitas Hall was home to the club until its closure in March 1975, it then had a temporary home in Sacred Heart Church Hall until the Community Centre was ready, the first Demonstration held there was in November 1977 and still continues there on the fourth Wednesday of the Month at 7.15p.m.

Margaret then introduced award winning Demonstrator Brian White from Girvan who has been a great friend of the club for several years and kindly came out of retirement to demonstrate and celebrate with us. Brian’s Demonstration was in keeping with the occasion and entitled "A Splash of Red" which it certainly was, Brian’s arrangements drew many gasps of admiration and enjoyment, especially from the lucky raffle winners who took home such wonderful and exquisite creations. Janice McGeechan in her own descriptive style gave Brian a well deserved vote of thanks.

There was then a short break before Margaret invited Mrs. Mosley and Mrs. Bertolini to join her in cutting the cake, Mrs. Mosley then addressed the company and expressed her delight in being with us at 92 and wished us well and hoped to join us again, Margaret then asked the company to raise their glasses and toast to the future success of the club.

Margaret then handed over to Past Chairman Mary Kelso to make a special presentation. Mary informed the company that in the clubs Anniversary Season in recognition of the service and commitment to the club over many years, May Robertson and Ann Malcolm were to become Honorary Members, and on behalf of the club she was honoured and delighted to present Ann and May with a Certificate and Brooch in appreciation of their work and dedication. Liz Gregg, Vice Chairman was then called upon to say Grace.

After dinner Liz gave the Vote of Thanks, firstly Malin Court Staff for the delicious meal and for being so accommodating in allowing our committee to take over the organisation of the table decorations, it was truly a team effort from the committee and the tables looked stunning. Anne Heriot, club member who baked and decorated the beautiful cake, Fiona of Fiofin Designs, who generously donated the Tulips used in the table decorations, Liz remarked that there is always a danger when giving a vote of thanks you miss someone so "everyone thank you."

The club are also indebted to Carrick Futures and Scottish Power Renewables for the grant we have received and we look forward to our next projects, one in Girvan where we decorate a shop window promoting membership which ties in with our Ruby Anniversary and NAFAS Emerald Anniversary, so look out for that in May, and in July along with 70 other clubs we have been invited by SAFAS to take part in Glasgow Cathedral Flower Festival which is also a Thanksgiving Service for the Opening of The Commonwealth Games. 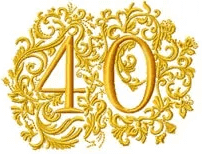